Next on my itinerary is a trip to Île aux Cocos, one of 18 islets studding Rodrigues’s vast lagoon. The drive to the sea takes me along hilly, winding roads past terraced fields and wild, rock-strewn tropical moorland before dropping down to the coast. there, I meet Rex, our skipper, who piles us into his boat for the two-kilometer passage across the lagoon. Pancake-flat and uninhabited, Cocos is a bird sanctuary; brown noddies and snowwhite fairy terns fill its thicket of casuarina and coconut trees. Rex explains that the terns don’t build nests. “they just balance their eggs on the branches, with no support,” he says.

The following day, I visit the François leguat Giant tortoise and Cave Reserve. Situated on a limestone plain, the 19-hectare site is named after the island’s first settler, a French huguenot who arrived here in1691, at a time when giant tortoises were so abundant that leguat claimed he could walk for a hundred paces across their backs without touching the ground. Unfortunately, the animals were hunted to extinction by the end of the 18th century, as was the flightless solitaire bird, a cousin of the dodo. The reserve is an attempt to set back the clock. Its charismatic manager, aurèle andré, and his team have restocked the area with hundreds of aldabra tortoises, a close relative of the original species, from the seychelles. They’ve also planted tens of thousands of native trees and shrubs, some virtually extinct in the wild, recreating what the island’s volcanic terrain must have looked like before people started meddling with the landscape. It’s almost prehistoric. Draw-net fishermen heading out across the shallows

Next I stay at Résidence Foulsafat. The house is beautifully remote, with an unobstructed view down to the sea and a wide roof over its porch. In the evening I dine with antoinette and Benoit Jolicoeur and their two children. One of the delights of staying at a Rodrigues guesthouse is the delicious homemade Creole cooking: we feast on cono-cono (shellfish) followed by parrotfish curry and crushed maize in rice. Another bonus is the people. Benoit makes a fascinating dinner companion, and he regales me nonstop with stories from his former careers as a government minister, Catholic priest, and editor of L’Express Rodrigues newspaper. 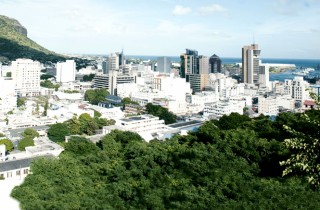 Travel in Mauritius: A Day in Port Louis

Travel in Mauritius: A Day in Port Louis

A day in the life of Mauritius’s unsung capital, Port Louis.