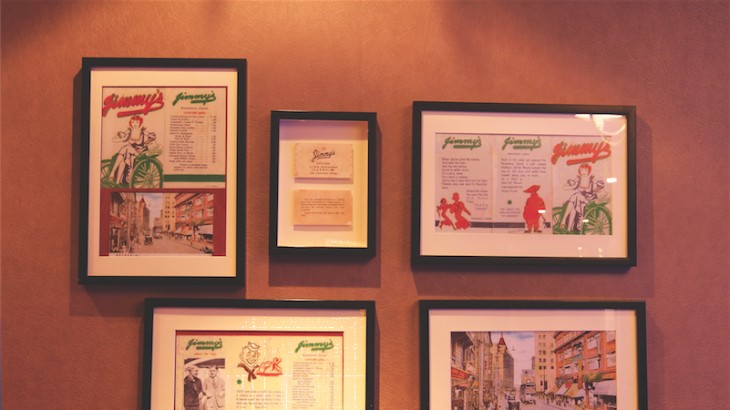 After an absence of more than 60 years, Jimmy’s Kitchen has returned to Shanghai with a menu straight from memory lane

A young lad from the American Midwest joins the navy and ends up stationed in China during the roaring 1920s. After being discharged, he sets up a dockside hamburger stand in Yantai and a popcorn cart in Shanghai, catering to homesick U.S. servicemen.

Jimmy James proves to have quite a flair for hospitality, and in 1924 he opens his first full-service restaurant on Shanghai’s Broadway (now Daming Lu). He calls it the Broadway Lunch, but everyone knows it simply as Jimmy’s Kitchen, and the name sticks. A second Shanghai location follows, and in 1928 the business expands to Hong Kong. The latter, on Wyndham Street in Central, has been serving its old-school menu ever since.

A table at Jimmy’s Kitchen.

History had different plans for Shanghai. During World War II, Jimmy, along with his wife and two daughters, was interned in a Japanese army camp on the city’s outskirts. Jimmy was put in charge of the camp kitchen. They finally fled China in 1948, ahead of the Communist Revolution, to Dallas, Texas.

More than six decades later, Jimmy’s Kitchen has returned to its roots, reopening in April at Shanghai’s historic Jin Jiang Hotel. Touted as the oldest continuously running Western restaurant in China (thanks to its Hong Kong connection), it serves as a culinary time capsule from 1920s Shanghai.