View from La Terraza, the setting at the close of The Old Man and the Sea. “I have long been fascinated with both Ernest Hemingway and Cuba,” says Texas-based sketcher and urban designer James Richards. “Hemingway, because of the unique way he collected experiences in places that were the grist for his work; and Cuba, because the island is irresistible as a time capsule of architecture and transportation circa 1959. The fact that Hemingway spent more of his working life there than anywhere else just makes it that much more appealing.” In 2014, at a time when traveling to Cuba was still off-limits to most Americans, Richards embarked on a Hemingway-themed tour of Havana and Cienfuegos that took in many of the writer’s old haunts, including La Bodeguita del Medio, a restaurant and bar on the narrow Calle Empedrado in Old Havana, as illustrated here. “This street was very familiar to Hemingway, and he was a regular at the Medio for their mojitos,” Richard says. “More than that, it remains of the largely unchanged settings that fueled his imagination—and some of his best writing.” 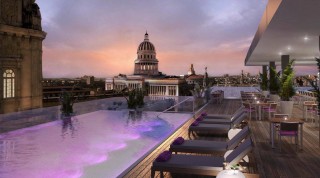