Opened in 2011, the restaurant came about as a side project of Know One, Teach One (KOTO), a nonprofit foundation that trains disadvantaged Vietnamese youth to work in the hospitality industry. Successful graduates often move on to Pots ‘n Pans; most of the bistro’s staff are KOTO alumni, while a third of its profits go back to the foundation as well as to other social initiatives.

“We want to have a positive impact on the community and to inspire others to create ethical businesses,” says cofounder and general manager Thao Nguyen, herself a graduate of KOTO’s inaugural training program in 2002. “We believe the hospitality industry can be a key driver of positive change in the world.”

Pots ‘n Pans’ ambitions extend beyond its social-enterprise mandate, however: this also happens to be one of the best places to eat in town, offering a rare (at least for Hanoi) combination of Western-style fine dining and innovative Vietnamese cuisine. Crab chowder comes garnished with poached quail egg, corn jelly, and mint; quail is glazed in sticky caramel and served alongside lotus rice stuffing; and sous chef Pham Van Thinh, another KOTO alum, elevates coconut and pandan into a silky panna cotta topped with coconut crumble and a drizzle of basil syrup.

It is also maintaining its edge through such ongoing initiatives as guest-chef programs (Yangon-based Swiss chef Felix Eppisser visited for a week in October) and a progressive dinner series called Moveable Feasts, during which guests enjoy cocktails and canapés at one venue, then move on to a new location for each course.

Says KOTO founder Jimmy Pham, who helped spearhead the restaurant, “Pots ‘n Pans not only delivers top-notch cuisine, it’s a frontrunner in fusing successful business with a social cause.”

One of the latest additions to the Tay Ho (West Lake) dining scene is Bluebird (7 Xuan Dieu; 84-4/3722-4165), where diners can sit in a private wine cellar and take advantage of two-for-one bottle and glass specials. Strong on labels from Chile, Spain, and the U.S., the wine list here is one of Hanoi’s best, with food to match: try the sea-bass seviche with taro chips, or the five-spice pork belly in pomegranate glaze. They’re elegant, satisfying, and surprisingly easy on the wallet.

As expats gravitate north to Truc Bach and Tay Ho, there isn’t much nightlife left in the city’s central business district. But Cielo 13 (13 Hai Ba Trung; 84-4/3824-8899) might change this. With ambitious cocktails like the wasabi-infused Cielo martini or the Oriental Garden—made with vodka, jasmine syrup, and pomelo and lychee juice—the rooftop bar is quickly becoming a destination unto itself. Set on the 13th floor of the Sun City building, it also offers a sweeping view of a city that’s changing by the moment. 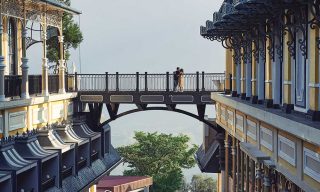