For all its ancient monuments, expressive cuisine, and authentic character, Extremadura remains one of the least visited regions in Spain. Visit now, before the word gets out

Extremadura, in southwestern Spain,is an old-world land that sustained a rich layering of ancient cultures—Tartessians, Celts, Romans, Visigoths, Moors, Berbers. We chose to visit because this sparsely populated but diverse region received little mention in any of our guidebooks, save for the fact that many of Spain’s conquistadors, including Hernán Cortés and his cousin Francisco Pizarro, were born there. We wanted to discover what the guidebooks had left out.

Encompassing the provinces of Cáceres and Badajoz, Extremadura was once, along with most of neighboring Portugal, part of the ancient Roman province of Lusitania, and has been a cultural crossroads for millennia. The Romans farmed and built bridges, roads, and aqueducts. The Moors were also fine farmers and engineers. After the Reconquista, the Christian knights who drove out the Moors were granted huge swaths of land, but they had little interest in farming, and the fields, long ignored, yielded less and less. By the 16th century, Extremadura had become a backwater.

How things change. In 21st-century Extremadura, you can visit cutting-edge contemporary art, chic shops, or ancient ruins that are literally across the street from each other. Innovative chefs meld earthy and haute cuisine, giving Extremeño food a new expression while embracing agricultural traditions—olive-growing, wine-making, and pig farming—that are thousands of years old. In addition to the celebrated jamón ibérico de bellota (cured ham made from free-roaming pigs that fatten on acorns), there is bounty in wild seasonal mushrooms, nuts, game, cheeses, and oak-smoked pimiento peppers. Ancient olive groves produce 30 different varieties of olives and fragrant oils that redefine the color gold. And you can thank the ancient Romans for bringing the grape to Lusitania. It thrives here; Extremadura is Spain’s second-largest wine producer, with vines dominated by Tempranillo and white varieties such as Cayetana.

For a native Californian like me, Extremadura’s dehesas (oak-studded pasturelands), with their toasted brown-sugar scent of dry grasses and spare pools of shade, are palpably reminiscent of the savanna wine country just north of my Santa Barbara home. This is a land of mild winters and hot summer droughts, and while much of it has been cultivated for more than 2,000 years, large tracts of scrub and woodland have been set aside as wildlife preserves. As a haven for more than 300 species of birds, Extremadura attracts birders the world over.

My photographer husband Macduff Everton and I land in Madrid on a clear, brisk November morning, greeted by an orange sunrise. From there, we drive three hours to Hervás, a medieval town on the banks of the Río Ambroz that will be our first stop on a journey to discover this lesser-known region of Spain.

“Mushrooms are abundant this season!” glows the owner of Restaurante El Almirez as he seats us by a sunlit window. The grapes have been harvested; it is now the time for chestnuts and other autumnal delights. We have the good fortune of arriving at the height of the season, and just in time for lunch. We linger over crepes filled with freshly foraged mushrooms, savory grilled venison with more mushrooms, roasted chestnuts, and a zorongollo salad of red peppers, fennel, onion, and olive oil from Gata. Between sips of a garnet-red Ribera del Guadiana wine, I am quickly learning that Extremeños pride themselves on the entire culinary process: the cultivation, preparation, and savoring of good fresh food and drink.

The next day we are up at dawn to take a stroll through the town’s narrow streets. As we come down the stairs, we meet the inn’s cook and owner, Carlos, who explains that El Jardín del Convento, converted from a mid-19th-century manor house, had been his grandparents’ home. Assuming we are expecting a meal, he adds, “No breakfast until nine. You see, the bread only comes at nine, and you can’t have breakfast without bread.” As one who usually breakfasts on double cappuccinos and a dollop of yogurt, I am charmed by his civility. Of course you can’t have breakfast without bread.

Skulking cats scatter as we wander around Hervás’s old Jewish quarter, the Judería. In 1492, shortly after the fall of Granada ended Muslim rule in Spain, Queen Isabella decreed that all Jews either had to leave the kingdom or convert. Yet their neighborhoods were preserved, and today they make for fascinating tourist attractions. In Hervás, the Star of David is a repeating motif, in ironwork and on walls and in crocheted white window curtains. Lime-green moss grows in a star’s outline incised on top of a wall.

After a big breakfast back at El Jardín—fresh figs, honeydew, oranges, eggs, ham, bee pollen, cheeses, quince jam, and the freshest of bread—we drive down a road flanked by olive orchards and fields and follow the signs to the archaeological site of the Roman town of Cáparra. It sits along the historic Ruta de la Plata, or “Silver Route,” the ancient cobbled commercial and pilgrimage road that crosses western Spain from north to south, connecting Mérida to Astorga. The current layer of this time-honored route is the modern A-66 freeway.

Walking among gnarled olive trees we come over a rise, and there it is, the magnificent Arco de Cáparra, a four-gated tetrapylon set at the crossroads around which the ancient settlement grew. Once travelers would have relaxed in Cáparra’s thermal baths or gymnasium, given offerings in a temple, attended a play in the large amphitheater, or traded goods in the forum. But the bustle of commerce gave way long ago to the silence of the ruins; today, we are the only visitors. A large flock of cranes rests in the grass, then takes off like a rosary flung against the turquoise sky. 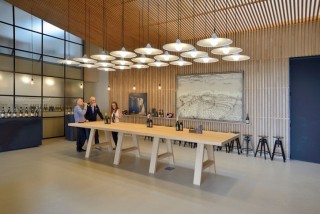 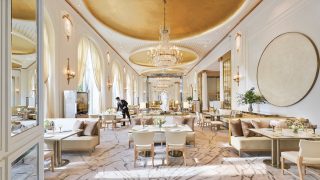 A tour of the winemaking hills of the Penedès region proves that Catalonia’s cavas have a beauty ... 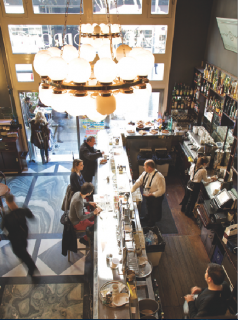 A Bite of Barcelona

Catalonia’s seaside capital is easily the most well-trodden destination in Spain. 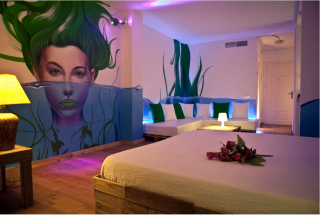 The Urban Spaces Ibiza is dubbed as "an art project disguised as a boutique hotel."