Despite its new allures, Santiago can only hold me for so long. Soon I’m on a morning flight to Puerto Montt in the Lake District, a region of snow-frosted Andean peaks and deep-blue lakes that marks the northern extreme of Patagonia in both Chile and Argentina. Founded by 19th-century German settlers, the seaside burg’s older pre-cincts exude a bygone European vibe, with gingerbread-style houses and shingled churches perched on hillsides above a harbor chockablock with fishing boats. I rent a small pickup truck and drive it onto a ferry headed for Chiloé, the largest of Chile’s southern islands and another place that I had long wanted to visit.

The short passage across the Chacao Channel offers a lesson in fluvial dynamics. Water flowing between the Gulf of Ancud and the open Pacific creates massive tides, which in turn generate a riverlike current and two-meter waves. I’m surprised to see a couple of sea lions surfing.

Before long I’ve disembarked at the northern end of Chiloé for the drive along the island’s east coast. Halfway down I board another ferry for the two-minute crossing to a lively fishing village called Achao. A Friday afternoon market is in full swing along the waterfront: farmers hawking apples and potatoes; fisherman peddling salmon, crab, and mussels; craftspeople offering baskets and sweaters. Andean pan- flute music pours out of a second-story window, and everywhere is the chatter of Chilote Spanish, slow-flowing and peppered with native Mapuche words.

I find a room in a fishermen’s hostel and stumble down to the beach. After weeks of rain, the skies have finally cleared and Achao’s residents are sunning themselves along the seawall and picnicking on the sand. The water is so cold it could drop a fever in an instant, but that doesn’t stop the local boys from stripping down to their skivvies for a dip in the sea.

From the beach I spot an imposing steeple and go to investigate. Fashioned from huge beams and delicate wooden shingles, Chilote churches are justly famous. But none is finer than Achao’s Santa María de Loreto, consecrated by Jesuits in 1730 and now the oldest surviving wooden church in Chile. The altar flaunts funky blue-and-white folk art designs, and if you get down on your hands and knees, as I do, you can see the wooden pegs that hold the floorboards and columns in place. Santa María is both a superb example of the local cultura de madera (woodworking culture) and a shrine to the great hardwood trees—alerce, coigue, Chilean cypress—that were once abundant in these islands, but are now scarce.

Across the plaza at the city hall, I find Ramón Yáñez, the area’s chief cultural attaché. By now it is late afternoon and my arrival presents Yáñez with a perfect excuse to forsake a stuffy office in favor of his waterfront house. Taking pride of place in his living room is a fastidiously polished accordion on which he composes folk music. But he’s also an avid student of Chilote folklore, and it isn’t long before our conversation veers toward the supernatural.

“Myths and legends are very much a part of what makes these islands special,” Yáñez tells me. Most of the stories center on terrifying creatures: flying she-devils (voladoras) that achieve immortality by devouring their own bowels; feathered reptiles (basiliscos) that feed on human phlegm; hairy, tree-dwelling ogres (traucos) that can kill you with a single glance. Yáñez says this incredibly rich and distinctive tradition derives from centuries of cultural and geographic isolation. “Even until the 1970s, maybe even the ’80s, most Chilotes believed in these stories,” Yáñez adds. “But not so much anymore.”

Yáñez shrugs. “There is a legend here about a ghost ship called the Caleuche, which collects the souls of the drowned. I don’t believe this, but twice on overnight journeys to our more secluded islands, I spotted a mysterious ship that crept up behind us, then disappeared. All I know is, I saw something with my own eyes. It creates doubt.” 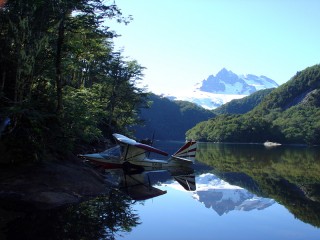