A land of chiseled mountains and dramatic fjords that have earned it renown as the Norway of Arabia, Oman’s northernmost peninsula makes for a wildly exotic experience

On one side a vertical wall of rock towered out of sight; on the other, the verge fell away to the deep blue of the Persian Gulf. We were approaching Khasab, capital of the Omani govern-orate of Musandam, just a few hours by car from Dubai. Gouged into the side of a mountain, the coastal road traced hairpin bends that followed natural folds in fractured walls of uplifted limestone. We swung around successive bends, one minute heading perilously toward the ocean, and the next almost grazing the rock face. Overhead, great blocks of undercut stone balanced precariously on ledges. Smashed boulders littered the roadside—a warning of untimely avalanches.

Situated at the northern extremity of the Hajar Mountains and cut off from Oman proper by the United Arab Emirates, this craggy, isolated peninsula juts into the Strait of Hormuz at the entrance to the Gulf; its name translates evocatively as “anvil’s head.” In the 16th century the Portuguese made Khasab into a great trading center, receiving pearls from Bahrain, dates from Mesopotamia, and incense from inland tribes. Today, the region offers spectacular mountain scenery and a coastline of magnificent fjords, scattered with isolated villages that are accessible only by sea. Relatively unknown to the outside world and still in the early stages of organized tourism, Musandam remains wondrously unspoiled.

Over sundowners on the balcony of our seaside hotel in Khasab, my partner Richard and I planned the next day’s expedition into the mountains. We set off the following morning along a winding, dusty track that finally crested at a ridge overlooking the wide bowl of the Sayh Plateau, 1,800 meters above sea level. Walled terraces of crops, cut into the hillsides, led down to farmland crisscrossed by fences that divided fields of wheat, alfalfa, and onions. A long tradition of trapping rainwater in cisterns for the cultivation of crops, as well as the ancient aflaj system of channeling water, is still maintained here. During the hot dry months of summer, farmers from the plateau move to the coast to harvest dates or catch fish, returning to their mountain habitat in time to plant winter crops. Some have migrated permanently to Khasab and other coastal settlements. But well-tended fields and some sizeable villas indicated the continuing presence of a successful and established farming community in Sayh.

Our route into the mountains continued to wind uphill, reaching 1,980 meters at the summit of Jebel Harim. It was in this less-than-hospitable yet magnificently rugged terrain that we first noticed neat stone walls that marked the entrances to cave dwellings once inhabited by forebears of the local Shihuh tribe. An ancient mountain people, said to be descendants of prehistoric immigrants from India, the Shihuh used caves or simple stone structures as shelters and to store their meager supplies of food. Armed with distinctive long-handled axes called jirz and known for making eerie warning calls that reverberated like the cries of wolves, they also developed a reputation for fierceness.

Such was the isolation of the Shihuh that up until a couple of decades or so ago, when the convention still existed, if you wanted to approach a Shihuh village, you fired your rifle while some way off as a way of knocking on the door. One story told is that a group of Shihuh, sent to help Sultan Taimur bin Faisal fight insurgents in the late 1950s, so terrified the local citizenry that they were relieved of their duties and sent back to their mountain stronghold.  Though times have changed, to this day, you still see men walking the streets of Khasab with their axes in hand. Whether used as a walking aid or a tool for cutting or for protection, the jirz is as much a tradition in Musandam as the decorative curved dagger, the khanjar, is in the rest of Oman.

On the far side of Jebel Harim, we drove along a narrow ridge that descended to the Rawdah Bowl, a lovely open valley scattered with acacia trees and home to people still living in traditional mountain villages, though with such modern-day assets as pick-up trucks or four-wheel-drives. Long before we heard the sound of its engine, we saw one such vehicle bowling across the plain toward us amid a whirlwind of dust. As it neared our own dust cloud, a friendly arm thrust through the open window to wave. 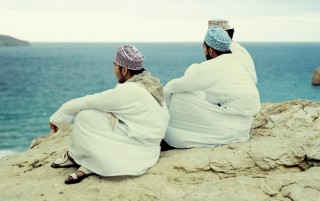 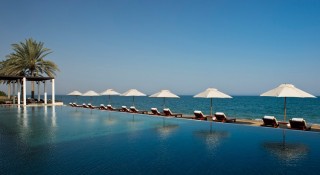 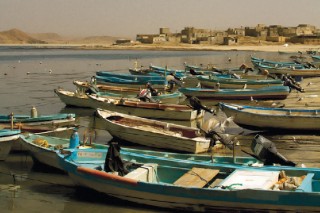