Above: Beach-bound near the low-key resort town of Alaçat?.

Under the radar for years, the windswept, idyllic coastline of Turkey’s Çe?me Peninsula proves an unexpected delight

We were tired of being cold. The March weather had made our two-week trip to Turkey a parody of a vacation gone awry. Heavy rain dogged us in Istanbul, Bursa was frozen with sleet, and the North Aegean coast greeted us with doleful, gray skies. “The good thing is there are no other tourists around … for a reason,” my husband joked as gale-force winds lashed the windshield of our rental car. Holiday spirits and good-humored fortitude were fading fast with each weather map that forecasted much of the country blanketed in either snowflakes or driving rain. It was, we agreed, time to head south.

But to where? With only a few days to go on our road trip, the fabled resorts of Anatolia’s Mediterranean coast were beyond our reach. Driving in Turkey can be a monotonous affair. Distances are often longer than you think, and while there are serene stretches—rolling hills of pine forest, groves of olive trees, a hamlet of weathered stone dwellings—much of what you see along the main motorways is grim and utilitarian. We passed gargantuan gas stations and housing blocks in dusty mauve or lime green that would rival China’s slapdash urban architecture in its breathtaking hideousness.

Our chosen salvation, picked almost at   random, was the Çe?me Peninsula, a 30-kilometer-long promontory that is, after Cape Baba to the north, the country’s—and Asia’s—westernmost point. It didn’t require heroic,  caffeine-enhanced driving. More alluringly, the forecast was fair with sunny skies.

Like most places along Turkey’s side of the Aegean, Çe?me (pronounced chesh-meh) is steeped in history, without the mobs of European holidaymakers that mar the tourist traps of the Med. The ancient Cretans settled here, followed by the Ionians. Known to the Romans as Kysus, the main town of Çe?me was purportedly the last overland stop along the Silk Road, the point where silks, spices, and other coveted rarities from the East were loaded onto ships sailing for Italy. The local wine earned a reputation, too, so much so that the enterprising Genovese built a fortress here in the 14th century to guard shipments of it. Then came the unavoidable decline: in 1566, the juggernaut that was the Ottoman Empire simply absorbed Çe?me and the offshore Greek island of Chios, and the peninsula’s once-bustling port was eclipsed by the nearby city of Smyrna.

Fortunes for this forgotten corner of the empire began to turn in the 1800s when Smyrna’s wealthy began building lavish summer homes to take advantage of the fine beaches, aquamarine waters, and hot springs. Driving past Smyrna, now known less evocatively as ?zmir, I can picture the rites of long-gone summers: well-fed wives of prosperous merchants sorting out the linen, silver, and rugs, children and pets underfoot, while servants hastily pack the unwieldy caravans of coaches—all desperate to set out before the morning sun became unbearable.

It isn’t difficult to conjure up a modern day version of this scene—the 21st-century descendants of Smyrna’s summering crowds fleeing the city’s heat, dust, and smog in their minivans. We had to chart our own escape route to the peninsula. After plying a lonely southerly coastal road punctuated only by yet more gas stations, we steer our car through the tangle of highways surrounding ?zmir, a sprawling metropolis of featureless concrete slabs. It’s dauntingly, almost aggressively ugly, though the graceful sweep of the bay helps to soften the scene.

A hair-raising few minutes brings us perilously close to the city, and then we’re safely on the toll road to Çe?me. Shopping malls and car parks give way to fields of artichokes, aniseed, and sesame; apartment towers are replaced by orchards of twisted fig and mastic trees. Minus the occasional wind turbine, the landscape can’t have changed much from the way it looked a century ago. We drive in appreciative silence, absorbing the rocky, brush-covered hills that give the terrain a melancholy beauty.

Our arrival at the Ta? Otel in the resort town of Alaçat? does little to dispel this sense of timelessness. A whitewashed stone house with indigo shutters, the hotel had once been the home of two sisters who kept their livestock downstairs while their family occupied the second floor. These are the unlikely origins of Alaçat?’s current renaissance as the peninsula’s toniest summer destination. In 2000, Zeynep Özi?, a marketing executive and keen windsurfer from ?zmir, bought the 19th-century house. The renovation required a small army of masons, carpenters, and electricians and provoked a chorus of skepticism from neighbors. “They thought I was crazy,” Özi? recalls. Ten months later, the town’s first bona fide boutique hotel made its debut.

Competition in the intervening years has reached absurd levels: there are now more than a hundred “butik” hotels in Alaçat?, a community of around 9,000 people year-round. But the eight-room Ta? stands out for its homey charm. Warmly greeted by the staff, we’re ushered directly into a cozy library—shelves crammed with art and history books, a crackling fireplace—and served thick slices of homemade apple cake with strong black tea poured into the tulip-shaped glasses ubiq-uitous in Turkey. O?lum, a mournful-eyed golden retriever who serves as the hotel’s mascot, pads over to inspect us before settling down on the kilim under our feet. No amount of lemongrass-scented towels and obsequious bowing—the leitmotifs of cookie-cutter hospitality in our home region of Southeast Asia—could match the unaffected welcome we receive here.

O?lum is soon followed by Özi?, a petite blonde woman who seems to bustle even while she’s standing still. Showing us a photo book she helped to compile about Alaçat?’s distinctive stone houses and history, she sketches the town’s past for us. As with so many settlements along the Aegean Coast, it’s a tale of banishment and exile amid the slow collapse of an empire.

Alaçat? began its climb out of obscurity in the 1990s, when windsurfers discovered the harbor’s favorable winds. Years of neglect meant the town was in a state of near-perfect preservation, filled with century-old stone houses

In the 1830s, Turkish landlords bequeath-ed land to Greek workers brought over to drain the nearby malarial swamps. For a few decades, the town, then known as Alatsata, flourished as a local hub of winemaking and olive-oil production. But the Balkan Wars of 1912–1913 flooded the region with Muslim refugees from Kosovo, Bosnia, and the Greek city of Thessaloniki. More disruption was to follow. In 1923, as an upshot of the Second Greco-Turkish War, a bilateral population exchange saw nearly half a million Greek Muslims deported to Turkey and more than a million Anatolian Greeks sent in the other direction. Left behind in Alaçat? were the vineyards and olive groves, which soon withered under the inexpert care of the new residents who had cultivated tobacco and bred livestock in their former lives. But the soil proved unsuitable for the émigrés’ traditional pursuits, and the townsfolk led a hardscrabble existence.

Alaçat?’s long climb out of obscurity began in the 1990s, when windsurfers such as Özi? discovered the favorable winds in the nearby harbor. Years of neglect meant the town was in a state of near-perfect preservation, filled with century-old stone houses with arched windows and thick walls that warded off the winter chill and the summer heat. Since the Ta?’s debut, the pace of gentrification has hit warp speed, fueled by a peak-season population that surges to 60,000. Now, by official decree, all new houses must mimic the old.

These days, Alaçat?’s season is undeniably summer—a fact we are reminded of as we wander past the shuttered shops and restaurants along the town’s winding cobblestone streets. Here and there are signs of the town’s newly minted trendiness: a Yast?k By R?fat Özbek boutique selling costly, exquisite ikat cushion covers; a flyer advertising the local outpost for Babylon, Istanbul’s eternally cool music club.

But for now, the town dozes in the thin spring light. Two slim girls minding a baklava shop that looks impervious to fashion watch us impassively. A tiny storefront selling small souvenir bottles of olive oil and pots of pine honey is miraculously open, though the grandmotherly figure keeping watch over the wares seems too astonished to see us to make a bid for sales. At one café on the main drag of Kemalpa?a Caddesi, a well-groomed couple in black—she with honey-colored hair and fur-collared coat, he with wraparound shades—sit outside, hands clutched around takeaway cappuccinos. We trade knowing looks with a neighboring shopkeeper and shrug in agreement: Istanbulis, harbingers of the summertime crowds to come.

Though we’re several months early for the season, we can at least indulge in the peninsula’s fine, summery fare. That has been the best surprise of our journey so far. Having girded ourselves and our digestions for hearty helpings of lamb, we’ve discovered that the dishes served along the coast are light and nourishing, laced with golden, elegant local olive oil: wild, bitter greens foraged from the countryside and sautéed; roasted eggplant mixed with tangy yogurt and a hint of garlic; vine leaves stuffed with rice and mussels.

At Agrilia, a tobacco warehouse converted into a restaurant, we start with a cracked-wheat salad with tomatoes, peppery arugula, and a dressing made with üzüm pekmezi, grape molasses that adds a rich, but not cloying, sweetness. Artichokes, we’ve learned, are a regional specialty, so we order the house-made pappardelle with artichokes, white wine, and pistachios—a dish that tastes of spring. That night, we sleep well underneath the high ceiling and toile bedspread of our room at the Ta?.

In Turkey, the best meal of the day is breakfast. Tables groan with olives, cheeses, pastries, scrambled eggs with peppers and onions, breads, cucumbers, and at least two varieties of honey. At the Nars Il?ca, a jewel-like hotel located in the former mansion of a 19th-century pasha, a heroic breakfast is served in the intimate drawing room. A sweet farmer’s cheese arrives cloaked in a blackberry coulis. Spinach-and-feta gözleme is feathery, but I’m more absorbed by the homemade preserves of peaches from the owner’s orchards, which I eat straight from the dish and then brazenly demand more.

For our last meal, we splurge at Ferdi Baba, a new restaurant in a half-finished residential development called Port Alaçat?. Late-model Mercedes-Benzes and Lexuses jam the parking lot; inside, the tables are packed with weekending Istanbulis exuding signs of European wealth: diamond studs, a cashmere sweater knotted around the neck, the flash of an expensive watch. Alaçat?’s winemakers, olive oil makers, and tobacco farmers retreat further into the distance. Then dinner arrives: a tender octopus salad and a perfectly grilled sea bass with a smattering of herbs and slices of lemon. We tuck in, thankful that at least some things remain eternal.

Getting There
From Istanbul, fly Turkish Airlines (turkishairlines.com) to ?zmir Adnan Menderes Airport (50 minutes), from where it’s a 45-minute drive to Alaçat?.

Originally appeared in the October/November 2011 print issue of DestinAsian magazine (“Chancing on Çe?me”) 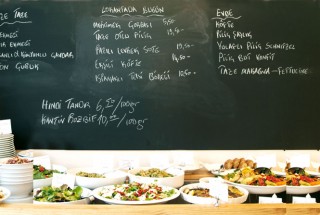 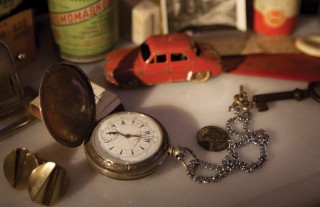 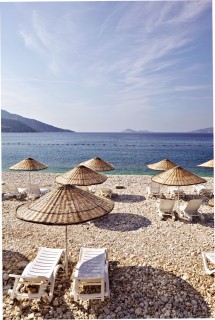