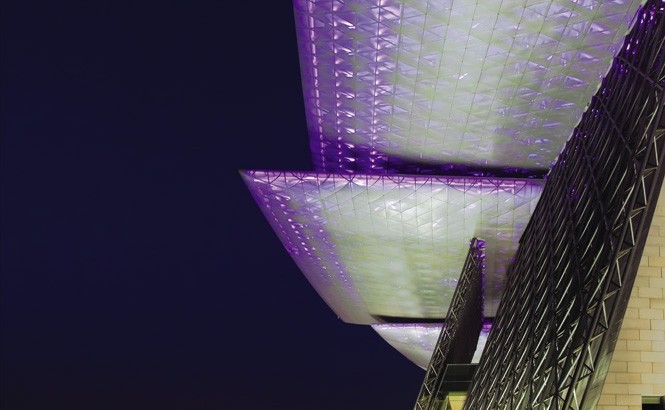 Cultural spaces are springing up across provincial China like dancers in a chorus line, often created by globally renowned architects to add an iconic landmark to a developing city. The Wuxi Grand Theatre by PES-Architects of Finland fits the bill perfectly in Wuxi, an industrial center of seven million people just 45 minutes by fast train outside Shanghai. Built on a peninsula that juts into Taihu Lake, the wing-roofed structure has drawn inevitable comparisons to the Sydney Opera House. Its eight steel roof blades—which change color thanks to thousands of LEDs—are supported by a forest of glowing columns that rise from the lake waters and continue through the theater’s main entrance hall. A 1,680-seat auditorium is encased in 15,000 solid bamboo blocks, individually molded for prime acoustics. Meanwhile, a touch of the architect’s homeland is evident in the 20,000 custom-made glass bricks in the lobby, meant to evoke Finnish lakes and ice. –Amy Fabris-Shi