At 4,313 meters above sea level, southeastern Peru’s La Raya Pass seems an unlikely stop for a luxury train. But it’s here, at the literal high point of our two-night journey from Cusco to Arequipa, that the Belmond Andean Explorer has creaked to a halt, allowing passengers to stretch their legs and soak up the scenery—along with servings of muña tea, a local remedy for soroche (altitude sickness)—as the sun dips behind the ice-capped mountains that surround us. The Belmond Andean Explorer as it traverses one of the world’s highest rail routes. Photo by the author.

Guests can choose between one- and two-night itineraries linking the former Incan capital of Cusco with Lake Titicaca—the world’s highest navigable lake—and Arequipa in the country’s far south. Along the route, enthusiastic guides bring the ancient Incan ruins of Raqch’i to life during a late afternoon visit; and in the desolate beauty of the National Reserve of Aguada Blanca and Salinas, spin tales behind the 7,000-year-old rock art of the Sumbay Caves. Silver-tongued excursion manager Aly Amaut even convinces a few guests, wrapped in provided baby alpaca shawls, to leave their cabins for chilly but spectacular sunrises over the glacier-fed lake of Sara Cocha and Lake Titicaca. The latter beckons with a detour to the floating totora reed-bed villages of the Uros people, followed by a lunch of local quinoa and lake trout on the UNESCO-listed island of Taquile. Meals aboard the Andean Explorer are no less enticing. Star chef Diego Muñoz has designed a menu that celebrates Peruvian produce and tradition—standouts include giant corn with cheese and paprika, and corvina a la plancha (seared sea bass with Andean mint–scented broad beans, citric yogurt, and onion broth). Soroche aside, it all makes for an unforgettable adventure.

Prices for a one-night excursion are from US$1,830 per deluxe cabin, inclusive of meals, drinks, and scheduled tours; see belmond.com. 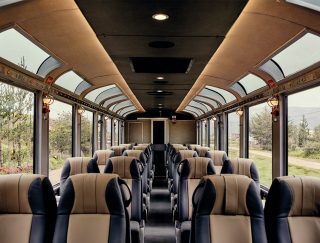 The latest addition to Inca Rail’s fleet of sightseeing vehicles is the 360° Machu Picchu Train.