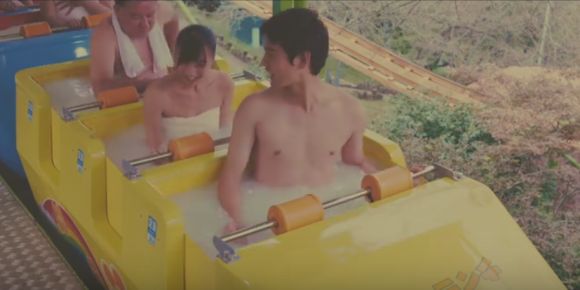 The Internet wins again. Beppu, a city on the southern Japanese island of Kyushu, has announced it will open an onsen-themed amusement park in July (onsen are Japanese hot springs). The park will be named Yuenchi, the Japanese word for “amusement park”.

This came after a cheeky concept video for the park became viral. Released on Youtube late last year, the video was produced with 12 tons of real hot spring water transported by the local fire department and 150 towel-clad extras.

Here’s what makes it cooler: before the video ends, Beppu’s mayor Yasuhiro Nagano appears, and tells the audience that if it reaches one million views, the city will build a real onsen park. The video became such a hit that it reached its target in just three days. As of this writing, it has reached more than three million views. Watch it below.

The city then started a crowd funding campaign which helped them to raise US$300,000, just enough to open the park for three days, according to NHK.

Beppu has long been known for its hot springs. It has eight onsen that when combined together, produce the most amount of hot spring water in the entire country. The city also has sand baths where tourists can immerse themselves in naturally heated sand.