Melbourne may be home to some of the best dining in Australia, but dedicated foodies now have plenty of reasons to venture into the hinterland of the state of Victoria for their next show-stopping meal.

Gazing past my feet through the wraparound window of a Ferrari-red helicopter, I feel like I’m suspended in a bubble, both the literal and metaphorical kind. The countryside below us is a patchwork quilt of faded brown and yellow fields, all dry and dusty after a long, hot Australian summer. In the distance, the pristine Victoria coastline shimmers in shades of turquoise, green, and blue. Our pilot is on the lookout for Don’s paddock. Don is a local bloke who has given us permission to land on his farm. When we finally spot him, he is standing next to a dirt-encrusted SUV, an arm shading his eyes as he looks skyward, the quintessential Australian. As we descend below the tree line, he waves a big hello as the wash of the rotor sends hay flying around us like a ticker-tape parade. Which is fitting—we’re about to dine at Brae, a farm-to-table destination restaurant near the rural township of Birragurra and one of only two Australian establishments on the World’s 50 Best Restaurants list. It sure feels like a celebration.

Birragurra sits on Victoria’s Bellarine Peninsula in the foothills of the Otway Ranges, a 90-minute drive southwest of Melbourne. The helicopter ride (which can be arranged through Brae if you feel like splurging) takes just half an hour. But while arriving in style has its benefits, it might also leave you feeling shortchanged—part of the beauty of this place is the getting here, a bucolic drive that combines coastal hinterland and dairy country with glimpses of beckoning waters. This gastronomically geared geography lays the groundwork for produce and protein that fit all the culinary buzzwords: fresh, seasonal, sustainable, ethical, organic. Brae’s own 12-hectare property adds homemade, homegrown, home-churned, and handpicked to the list. The restaurant boasts an organic kitchen garden laid out in tidy rows, a fruit orchard covered in nets to keep the birds away, an old olive grove, and beehives. Diners who wish to linger can avail themselves of the six-suite hotel that opened on-site last year; each of the slate-floored rooms comes complete with a cocktail bar, turntable and record collection, and views of the pastoral landscape. Brae’s philosophy of “contemporary cuisine built around an immense respect for nature and seasonality” is down to chef and owner Dan Hunter’s all-encompassing passion. His tasting menu, eaten in a modern, pared-back dining room set within the shell of a lovely old weatherboard farmhouse, is a tantalizing culinary journey. The dishes tend to stop conversation, allowing the brain to focus on the fun your taste buds are having. Savory smoked-eel churros bring a hint of humor, as does the Iced Oyster, a rich and creamy sorbet served in an oyster shell with a top layer of mossy-looking matcha. But it’s the garden-fresh flavors that really make you sit up and think. Tiny teardrop peas embedded in mini lemony tarts taste as sweet and green as if they were just picked, which no doubt is the case. Beetroot served on fresh honeycomb and a mound of shiny orange rainbow trout roe hits every corner of the mouth with sweet, savory, and salty sensations. Grilled prawn heads—“made to be sucked and crunched,” our waiter explains—sit next to nasturtium-enfolded parcels of prawn meat. The finger-lime “caviar” on top, like the petals, leaves, sprigs, berries, and flowers that garnish the ceramic plates, is a reminder that the garden and the seasons run the show. Brae, which opened in late 2013, is among the most awarded of Victoria’s regional restaurants, a term used by local food bible The Age Good Food Guide to denote establishments located outside metropolitan Melbourne. But it’s just one of an increasing number of such eateries that are on par with some of the best restaurants in the big city. As Hunter himself jokes, “We’re not just giving them a run for their money, we’re crushing them!”

You don’t have to take his word for it. This year’s edition of the Guide saw more regional restaurants than ever before receive coveted chefs hats—Australia’s answer to Michelin stars. Not only that, five of the 16 awards given out went to regional restaurants. Among them, Brae won Restaurant of the Year. Newcomer Igni, in Geelong, debuted with two hats and took home accolades for Regional Restaurant of the Year and Chef of the Year, which was awarded to co-owner and chef Aaron Turner. Wagyu with pine mushrooms, gnocchi, garden carrots, and sweet potato at the Royal Mail. Photo courtesy of the hotel.

The latter was an unexpected result given that Geelong is a small beachfront city with no defining gourmet bent, but the surprise diminishes after eating there. Igni’s five-course menu-less experience invites diners to—often unwittingly—respond to the flavors and unique ingredients that are placed in front of them. This often occurs with the gulp of a perfectly paired pinot or riesling. On my visit, a delicate little pile of crispy saltbush leaves (the scrubby native bush that gives lamb a richer, herbier flavor) crunch with the familiar flavors of salt and vinegar. A simple pale green hinterland leaf, naturally grown near the ocean, tastes so much like an oyster, it wouldn’t be out of place with a squeeze of lemon on it. Zucchini flowers are stuffed with pickled mussels, combining garden and sea, and King Edward potatoes come disguised as noodles and are tossed through with garlic butter and chives. We are kept guessing by a delicious sorbet dessert, its origins at first undisclosed, that turns out to be flavored with caramelized onion. A private dining room at Ezard at Levantine Hill. Photo courtesy of the restaurant.

The theme, again, is unashamedly foraged and locally grown, “a trend that was partly behind the regional push of fine dining,” according to Good Food Guide editor Roslyn Grundy.

Two hundred kilometers west of Geelong, Robin Wickens can attest to this. Previously at Interlude restaurant in the hip Melbourne suburb of Fitzroy, British-born Wickens is now executive chef at the Royal Mail Hotel in Dunkeld, a rural town at the southern end of the Grampians mountain range, a bushwalker’s paradise that erupts from the surrounding plains like a tidal wave. Wickens’s playground extends beyond the Royal Mail’s award-winning dining room into a former horse paddock turned kitchen garden, the biggest of its kind in Australia. The one-hectare plot, home to more than 400 varieties of edible plants, has been in the making for seven years, and guests staying in the hotel’s varied and beautiful accommodation have the option of a chef’s tour.

I am fortunate to have Wickens himself as my guide. The soft-spoken chef weaves in and out of tomato vines, corn rows, and beds of artichoke while explaining how this verdant patch, in a hundred shades of green, inspires his exceptional culinary offerings. It’s also part of the Royal Mail’s goal of becoming a self-sustainable entity. Other projects include a snail farm, mushroom cultivation, 130 chickens that produce all the hotel’s eggs, a stone-fruit orchard, olive grove, beehives, and an enormous glass greenhouse for propagating seedlings. The hotel rears its own beef and lamb as well. Anything not grown or raised on the property, Wickens says, is sourced from reliable local producers. Among them is Great Ocean Ducks, a 16- hectare farm that feeds its birds fresh strawberries and organic grains. One of Wickens’ signature dishes, Duck and its Dinner, playfully replicates this diet. Pink, thin-skinned slices of duck breast are served with pickled strawberries and apple, a granola of oats, seeds, almonds, and honey, and prettily garnished with wild rocket, society garlic flowers, and salad burnet. It’s worth the trip out alone. 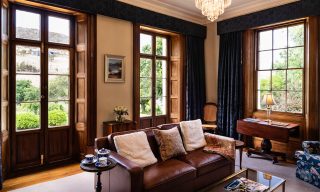 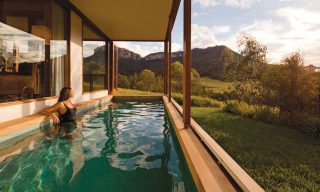