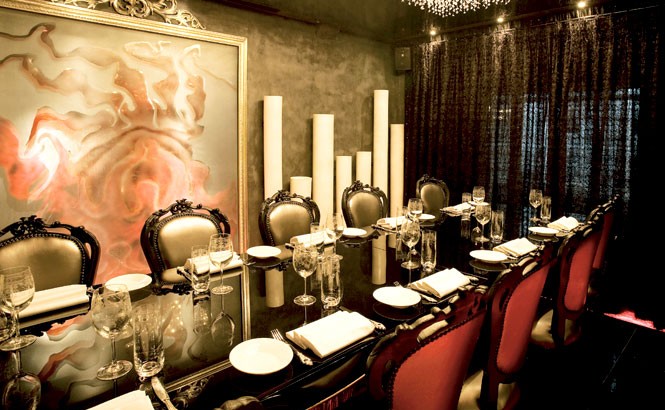 Above: Dinner service in Hell, one of Dada’s three biblically themed private rooms.

Hong Kong’s two newest lounges are raising eyebrows on both sides of Victoria Harbour. In the heart of Kowloon, Dada (2/F, 39 Kimberley Rd.; 852/3763-8778) occupies the second floor of the Luxe Manor hotel. Inspired by the surrealist 1920s art movement of the same name, the bar is a confection of clashing colors, mismatched prints, and assorted seating. If you find the lack of design logic overwhelming, retreat to one of the three themed private rooms—Heaven, Eden, and Hell. Across the water in the island’s Soho area, Déjà Vu (B/F, 41 Staunton St.; 852/3481-9996) boasts similarly elaborate decor. Set below a Chinese temple, the semi-private club (it’s members-only on the weekend) welcomes guests with soaring ceilings, tinted mirrors, and an arresting portrait by photographer Annie Leibowitz. Soak up the surreal surrounds while sipping a glass of Prosecco served with a bite-sized chunk of Amedei dark chocolate—a combination so comfortingly familiar you’ll swear you’ve tried it before. –SIMON OSTHEIMER