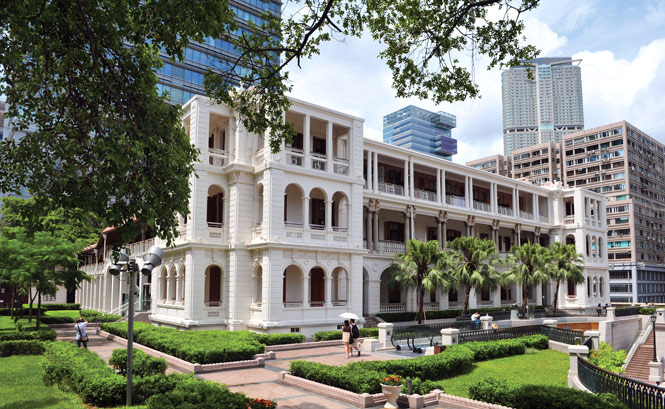 A new look at one of Hong Kong’s oldest government buildings.

Getting to Hong Kong’s Hullett House can be a test of patience. Located at the tip of Tsim Sha Tsui, the hotel is under siege nightly by an army of photographers, bustling for space before the site, newly madeover by Hong Kong’s Aqua restaurant group. Crowning the 1881 Heritage complex, once the city’s Marine Police Headquarters, the boutique property is certainly striking—a handsome, 126-year-old building that is floodlit at dusk, with high-end boutiques and a cascading fountain in front. The surrounding gardens here are still home to some 70 foreign varieties of plants and trees, as well as a shiny, hoisted time ball, once used by departing mariners to set ship’s clocks.

Inside, the hotel’s 10 suites are individually designed. The Tsing Lung room, for example, comes with hand-drawn lacquer murals and a four-poster pagoda bed, while the D’Aguilar suite nods to Hong Kong’s colonial past with furnishings reminiscent of the English countryside. Although some of the decor is over the top, Aqua Group owner David Yeo certainly did his homework when planning the project. He pored over old sketches and photographs of the building, visited the city’s most venerable teahouses, and recruited former seaman-turned-historian Iain Ward—who once called the hilltop headquarters home—to help develop the hotel’s five restaurants and bars.

Mariners’ Rest, a watering hole that once welcomed police and seafarers alike, now dishes up British pub fare, although its rooms, including three original holding cells, showcase the site’s history through antique memorabilia and old photos from the Marine Police archives. Meanwhile, Hong Kong’s teahouse culture is on display in Loong Toh Yuen, a Cantonese dining room done up with Art Deco mirrors and an antique fireplace; the restaurant’s courtyard features tall walls hung with dozens of old dovecotes as a tribute to the pigeons that once carried messages from the building to boats on the harbor. “This restoration was something that had to be done before Hong Kong’s most precious memories were lost,” says Yeo of his hotel, which opened late last year.

It certainly makes for one of Hong Kong’s most intriguing billets, though some conservationists have criticized Yeo for reimagining history, rather than preserving it. The redevelopment of the site, which saw the excavation of much of the hill where the barracks stand, has been so extensive that visitors could be forgiven for thinking Hullet House is brand new. Maggie Brooke, chairperson of the Heritage Hong Kong Foundation, has been disparaging of the process. “We’ve always had reservations about the approach taken to the adaptive re-use of this building,” she says. “The destruction of the original hillside setting has also had an adverse impact on the significance of the place.”

Still, Yeo defends the project, saying that regardless of whether it’s absolutely authentic or not, it should still be seen as a “gift to the city.”

“When guests come here, we want them to feel like they’re experiencing something very special, and something very Hong Kong,” says Yeo. “That was the most important aspect of this project.” 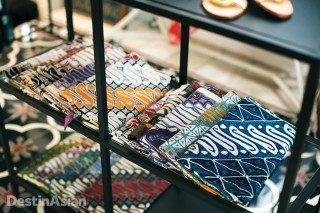 A trio of young designers in Jakarta are putting a new spin on Indonesia’s age-old textile traditi... 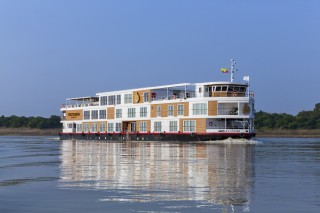