Stop the Clock, a sculpture by Jane and Mario Downes from the 2015 edition of Headland Sculpture on the Gulf.

A scenic 35-minute ferry ride from downtown Auckland, the low-key island of Waiheke punches well above its weight. Thanks to a fertile landscape studded with vineyards and wineries, local restaurants that offer a mouthwatering array of island-grown produce, and an abundance of galleries and craft stores, this jewel in the Hauraki Gulf is a popular escape in the summer months. Culture vultures have another reason to go now: for three weeks from January 27, Headland Sculpture on the Gulf will bring modern art to a two-and-a-half-kilometer stretch of the western coastline, showcasing the newest works from some of New Zealand’s most established artists alongside a pool of emerging talent. It’s a combination of nature, art, food, and wine that should satisfy even the most discerning appetite.

Where to Stay
For a luxe Kiwi “bach” (holiday cottage) experience, The Boatshed (doubles from US$680) has five nautically themed suites and two bungalows above Little Oneroa Beach.

What Else?
Winetasting is a must on Waiheke, so join an Afternoon Artisan Tour (US$132 per person) that calls in at three of the island’s boutique vineyards and a microbrewery, with a platter lunch included.

Where to Eat
Locally farmed Te Makutu oysters are on the menu at Mudbrick, where diners also enjoy uninterrupted views all the way back to Auckland. Hidden amid the vineyards of Onerangi Valley, Te Motu – The Shed serves up innovative rural fare such as Moko smoked eel with ryecaraway noodles. 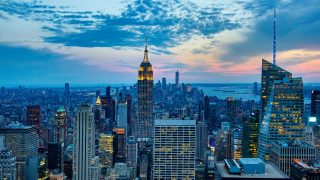