A longtime resident explores the Thai holiday island’s enduring appeal, and discovers that there’s more on offer than ever before

The first time we visited Phuket, it was a complete disaster. My wife and I had been invited down from Bangkok, where we were then living, on a last-minute press junket. In hindsight, it had sounded too good to be true: spend New Year’s Eve partying in Patong, be served free alcohol and food, and stay in a plush resort right by the beach. Within 15 minutes of receiving the phone call I’d said “yes,” and by the end of the week, we were on an evening flight out of the Thai capital, headed south to Phuket.

While the short plane ride went smoothly enough, it all started to unravel as soon as we reached the hotel (I won’t say which one—but it was on Karon Beach, over the hill from Patong). There were ants and cockroaches in our room, the swimming pool smelled like disinfectant, and breakfast the next morning consisted of leftovers from the night before. Not only that, the New Year’s Eve party was entirely forgettable. We snuck out at the first available opportunity and wandered the honky-tonk streets of Patong, doing our best to avoid the staggering knots of inebriated Westerners and the katoeys (transvestites) who stalked the pavements in too-revealing micro-minis. When we boarded our flight home the next day, we swore we’d never return to the island.

Eight months later, we moved to Phuket for good. So what changed?

First and foremost was the birth of our first child, a boy. As he quietly lay in his crib, helpless, we started to look around Bangkok’s crowded cityscape and tried to imagine him growing up amid the pollution, traffic, and skyscrapers. Then we pictured the blue skies, palm-fringed beaches, and mercifully low-rise buildings of Phuket.

Secondly, a good friend of ours who now worked at one of the island’s many hotels assured us that Phuket was not Patong—far from it, in fact. She persuaded us to come down on a second trip, where she would show us the “real” Phuket that she knew and loved. It helped that this time we stayed at her five-star resort in a picturesque area. But what really opened our eyes was a journey into Phuket’s Old Town.

Some 150 years ago, this small settlement was a thriving center of trade and commerce, populated mainly by Hokkien-speaking immigrants from China’s Fujian province. They came in their thousands, drawn by the opportunity to cash on the island’s thriving tin-mining industry. Many tried and failed, ending up spending their hard-earned money in the opium dens and whorehouses that sprung up to cater to them. Others found jobs as middlemen, helping to send money back to relatives in China, or opening up coffee shops and food stalls to fuel and feed the toiling workers. The most successful built huge, columned mansions on the fringes of town, fronted by sprawling gardens, and with dozens of servants to cater to their needs. But as the tin mines were gradually depleted over the next 80 years, the island was left scarred with craters—some called it a moonscape—and the Old Town’s future was put on hold. Indeed, for decades the only time it came alive was during the annual Vegetarian Festival.

When we first visited, the Old Town was a cultural and commercial desert. Sure, it had its quaint Sino-Portuguese shophouses, but life here was sleepy, to the point of being non-existent. What struck us though was the sense of past glories, and the realization that Phuket had a rich past that had preceded its tourism boom by more than a century. Finally, we’d found a place where we could wander the streets without being accosted by touts, or having to run the gauntlet of beer-swilling tourists.

But back to the Vegetarian Festival. This innocuous-sounding celebration conjures up images of placid adherents (they are mostly ethnic Chinese) spending their days in quiet reflection and worship, nibbling on a spartan diet of vegetables and tofu. While that is true, what the name doesn’t tell you about is the riot of firecrackers and self-mutilation that accompanies the change in diet.

In October last year, I woke up early one morning while the sun was still struggling to rise above the mountains that run down the length of the island, slung my camera over my shoulder, and started up my little yellow scooter. I was headed to the Jui Tui Shrine in the heart of the Old Town. Though I had never been to it before, I knew I was headed the right direction by the dozens of people, dressed in white from head to toe, also headed the same way. For participants, the color white symbolizes purity. Along with eating meat, they are forbidden from drinking alcohol and having sex for the duration of the 10-day-long festival.

As I drew close to the temple, I heard the unmistakable sound of firecrackers exploding in rapid-fire staccato, while gray, cordite-scented smoke hung in the morning air. For the uninitiated, it must have seemed like they’d entered a war zone. The going was extremely slow, as hundreds of motorbikes parked on either side of the road slowed traffic to a crawl.

Eventually, I managed to slip past the queued cars and pickup trucks and turn down a small side road to the Jui Tui Shrine. But I arrived too late—the procession had already left without me. I got back on my scooter and weaved through the narrow lanes, desperately trying to catch up with the parade. Weaving past several floats, upon which sat ladies dressed in Phuket finery, I finally saw them ahead of me—the marching men of god.

Known in Thai as mah song, literally “steeds of the gods,” they are probably the most famous and also most shocking aspect of the Vegetarian Festival. Apparently, you don’t choose the god that rides you. They choose you. After the festival’s 2012 edition, I had asked first-time participant Watcharaporn Ponput to describe her experience. “My master came to possess my body while I was watching the parade in Phuket,” she told me. “I don’t remember what happened while my body was possessed. My friend told me that my body shook, and then I ran into a nearby shrine. Someone told me that when I was under my master’s control I ran into a burning firecracker, and I also pointed a finger to my cheek, meaning I would pierce it.”

Piercing is the most graphic form of the mah song’s worship. Originally, it entailed small, slim skewers being put through their cheeks, a form of penance and proof of devotion. In modern times, though, as the Vegetarian Festival has become a major international tourist attraction, the objects used have become outlandish.

As I stood on one of the main thoroughfares in the Old Town, I watched as men and more than a few women walked by with bicycle spokes, exhaust pipes, gun barrels, umbrellas, swords, bows, and even flowers thrust through their cheeks. Others were cutting their tongues with saws, blood streaming down tunics decorated with Chinese characters and religious symbols. Several were flaying their backs with spiked balls. And at one corner, I watched, stunned, as two men repeatedly chopped at their own backs with axes.

It’s a far cry from the festival’s humble beginnings back in the early 1800s. According to the legend, a Chinese opera troupe from Fujian was visiting Phuket, having come to the island to entertain the immigrant tin mine laborers, when all of the cast members were struck down by a mysterious, incurable disease. Desperate for help, they prayed to the gods and went on a strict vegetarian diet to prove their obedience. Miraculously, they were all cured, and the festival has been a tradition amongst the island’s Chinese community ever since. 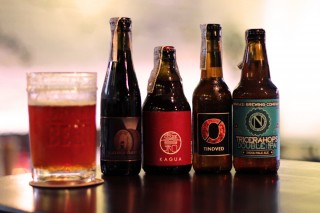 Bangkok is Southeast Asia's top city for craft beer. Here, we talk to its experts and go to its hot ... 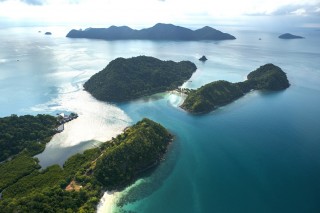