Born on safari in what is now Zambia, Geoffrey Kent’s destiny was mapped out for him at an early age. He co-founded pioneering expedition outfitter Abercrombie & Kent in 1962, bringing creature comforts to the Kenyan savanna. Today, as the company marks its 50th anniversary, he oversees tours in more than 100 countries. DestinAsian caught up with him recently in Kenya to talk about how it all began.

What were your first A&K camps like? The tents took a long time to erect, and the beds were just low cots with mosquito netting. We’d have a “shower tree” nearby—you would need a sturdy branch to hang the three-gallon canvas bucket. There were luxuries, though: an icebox, champagne, smoked salmon.

How has Kenya changed since then? When I was growing up here, Kenya was the wide, open spaces you see in Out of Africa. The Masai Mara and Lewa Conservancy still offer that sense of space, but farms are encroaching on the land surrounding game reserves.

Any close encounters while on safari? One of my scariest experiences was with Richard Burton in Kenya. We were enjoying sundowners when I heard a roar and lots of screaming and turned to see four lions bringing down a buffalo in our campfire! I upended a table and gathered the guests behind it as a barricade. The next day, Burton wanted to know if we could do it again.

Your all-time favorite place? The Galápagos. I love to be active, and there you can scuba dive or snorkel with sea lions and stroll through colonies of penguins and blue-footed  boobies. –Natasha Dragun 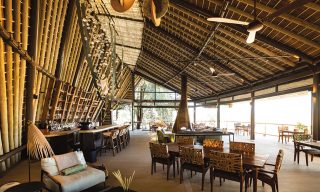