For his first venture outside of his native Basque Country, three-star Michelin chef Martín Berasategui brings haute Spanish cuisine to Shanghai. Set in the historic 1921 Villa Rouge, a handsome red-brick mansion inside Xujiahui Park, Restaurant Martín is plush, yet homey, in design: old gramophones and leather sofas fill the cigar bar (which also hosts live jazz bands), while tables are laid out in a series of rooms across the building’s two levels. Food-wise, Martín also runs on dual tracks. Simple Spanish fare—suckling pig, hearty paella, croquetas—sits beside signature Berasategui dishes like peach gazpacho with seawater jelly and red snapper with edible crystallized scales. As toothsome as the tasting menu is, the restaurant’s greatest allure might just be its outdoor terrace: a sunken nook enveloped by camphor and plane trees extending back into the cool of the park (811 Hengshan Lu; 86-21/6431-6639). –PETRINA PRICE 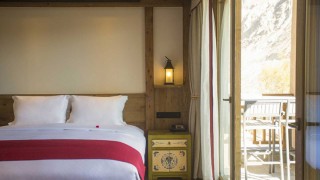 A gateway to the glacier of Meili Snow Mountain National Park along an ancient trail, the prop­erty...