Inside one of the guest rooms at Svatma.

Tamil Nadu’s classical arts take center stage at this gorgeous heritage property, a 150-year-old mansion that once belonged to Carnatic musician Rama Kausalya. His niece, a bharatnatyam dancer and architect, has opened up the former family home to paying guests, while adding a sympathetic extension of 31 rooms and a 250-seater hall for cultural performances. The hotel balances contemporary chic with all manner of regional antiques: you’ll find bejeweled Tanjavur paintings, stone sculptures from Mahabalipuram, Swamimalai bronzes, Chettinadu woodcraft, and Kumbakonam brass lamps adorning the spaces. Not to be missed is a sip of traditional filter coffee at the restaurant, a homey venue with swings for chairs, Brahminic Tanjavur thalis for lunch, and superb seven-course South Indian suppers that elevate Tamil cuisine to Michelin-star standards. Svatma’s fare is all organic vegetarian, but its balance and depth of flavor will be a delight for even the most avowed carnivore. History buffs take note: the young general manager has an encyclopedic knowledge of the Chola Empire, India’s only one to have penetrated into Southeast Asia. Perhaps its greatest monument is the nearby UNESCO-listed Brihadeshwara Temple, a millennium-old complex whose colossal central tower can be seen from the hotel’s rooftop terrace. (91/4362-273-222; svatma.in; doubles  from US$239). 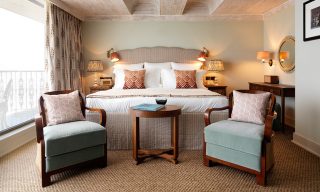