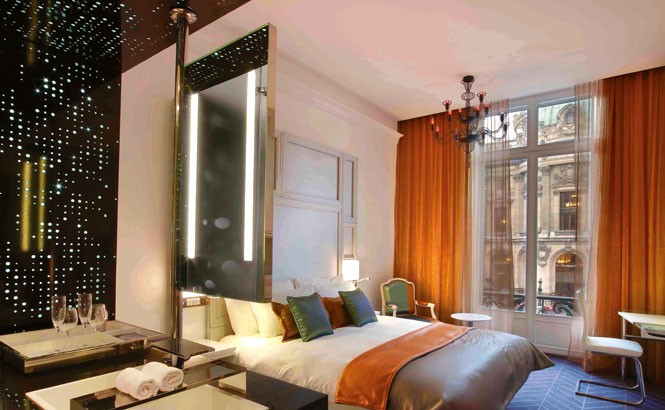 After W Hotel’s flashy European debut in Barcelona in 2009, and then a similarly luminous launch in London’s Leicester Square last year, the brand’s new location in the French capital is as elegant and discreet as the city itself. The 91-room W Paris-Opéra (4 Rue Meyerbeer; 33-1/ 7748-9494; wparisopera.com; doubles from US$841) inhabits an 1870s Haussmann-era office building retrofitted with a pattern-changing “digital wall” that undulates through the public and private spaces. Rooms, most of which offer stunning views of the magnificent Opéra Garnier, have a cool-operator look that contrasts the original high ceilings and graceful moldings with a chic très Parisien black, gray, and taupe color scheme and sleek contemporary furniture. All told, the hotel makes a sassy statement in the City of Light’s sedate central business district, and will doubtless be a hit with fashion-lovers heading to Paris to power-shop the city’s boutiques—it’s just a few steps from Galeries Lafayette and Printemps, the biggest department stores in town.—Alexander Lobrano